The mild winter climate of southwestern British Columbia provides ideal wintering conditions for many species of migratory birds. Several of these species are either declining or are poorly monitored, including ‘Sooty’ Fox Sparrow, Golden-crowned Sparrow and Pacific Wren are unique to BC. 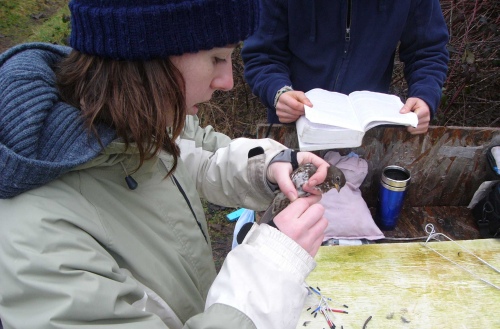 In 2010, IIBO initiated a pilot Winter Songbird Monitoring program examining the songbirds wintering on Iona Island. This is the first program of its kind in Canada to monitor the survival of these birds passively, where the use of bird feeders do not bias survival rates. We are following protocols similar to those used for Institute for Bird Populations winter monitoring programs that take place from the southern US through Central America and the Caribbean. The results of this program could pave the way for a network of stations across southwestern BC monitoring the wintering populations of songbirds.

Dates: This program runs from November to March, with four days of monitoring per month, starting at thirty minutes before sunrise and running for six hours.