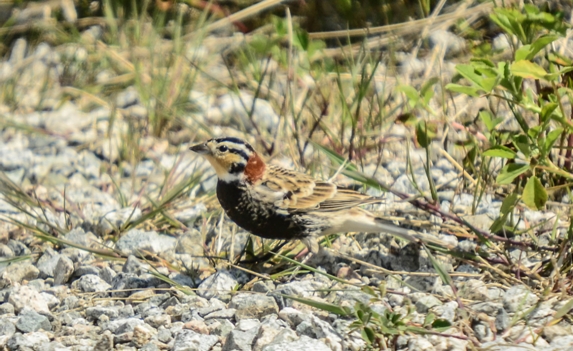 The total number of birds banded dropped slightly from last week, but migration has remained very exciting. On May 5th a record breaking 263 birds were banded at IIBO, of which 126 were Myrtle Warblers and 77 were Audubon’s Warblers. Iona Island’s third record of Eurasian Collared-Dove occurred on May 3rd when two birds flew over the station. This species is rapidly increasing in population throughout Metro Vancouver and their presence was not unexpected.

The most exciting bird this week was a Chestnut-collared Longspur that was found by Tak Shabata along the South Jetty on May 7th. This bird was seen and photographed from mid-morning until dusk, but disappeared by the next morning and hasn’t been seen since. This is the first record for Iona Island, and only the second record for the Vancouver checklist area; the first since 1981.

Waterfowl migration has slowed down considerably this week. Aside from the resident Canada Geese, the only migrant geese seen were Greater White-fronted Geese on the 3rd. Diving ducks have been seen regularly in low numbers on most days, and Redheads have been present in the sewage lagoons from May 6th – 9th. Dabbling duck numbers have dropped since the beginning of the week, with the exception of Cinnamon Teal, which have become a regular visitor to the outer ponds. Another sign that waterfowl migration is waning, was the presence of the first young of the year for Canada Geese on May 4th and Mallards on May 8th.

Shorebird migration has slowed down this week as well, although a few new migrants were seen from the count area. IIBO’s first Semipalmated Plover and Spotted Sandpipers of the spring were seen and heard on May 8th and a flock of four Whimbrel flew over the outer ponds on the evening of May 7th. Western Sandpipers and Dunlin numbers have fallen drastically whereas Least Sandpipers have been moving through steadily all week. In addition, Semipalmated Sandpipers have been encountered several times since May 5th.

The first Vaux’s Swift of the year was seen on May 6th and the first Cedar Waxwings were seen the day before. Purple Martins became increasingly abundant after the 5th, including a high count of 26 on May 7th. Trees Swallows were easily the most abundant swallow species this past week, while the other swallows have continued to push through in low numbers. Kinglet migration has virtually finished, with only one Golden-crowned Kinglet seen this week and fewer than three Ruby-crowned Kinglets seen each morning. American Pipits were encountered on the 4th, 5th, and 7th this week and the first Warbling Vireo of the spring was banded on May 7th. At least one Sora was seen and heard intermittently over the last week and a pair of American Bitterns were seen sitting in the north outer pond on May 6th. 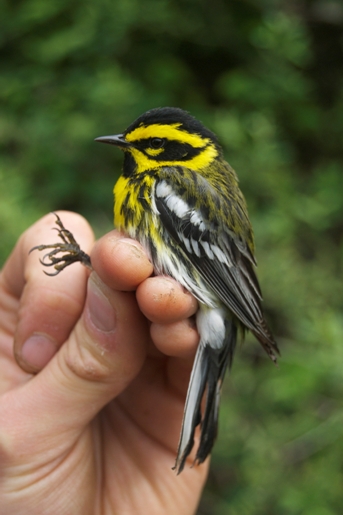 Warbler diversity increased this week, with a season high of 8 species encountered. Although they seem to be slowly declining, Yellow-rumped Warblers were still the most abundant warbler each morning this past week. Close to 1,300 Yellow-rumped Warblers were seen around the outer ponds on May 3rd. Orange-crowned Warblers increased in numbers later in the week and the first of the orestera subspecies (found in the interior) this spring was banded on May 8th, along with 26 individuals of the lutescens subspecies. Wilson’s Warblers have increased to about 40 individuals counted on most mornings this past week, and Townsend’s and Yellow Warblers made their first appearance at IIBO on the 8th.

May 3rd had the highest number of White-crowned Sparrows so far this season, with 6 banded and 34 counted. Fox Sparrows have not been seen after May 3rd, and Lincoln’s Sparrows have steadily declined after 19 were reported also on the 3rd. The first female Yellow-headed Blackbird of the year was seen on the evening of May 7th and Brown-headed Cowbirds were much more abundant this week with 20 counted on May 7th and 37 seen on the 8th.