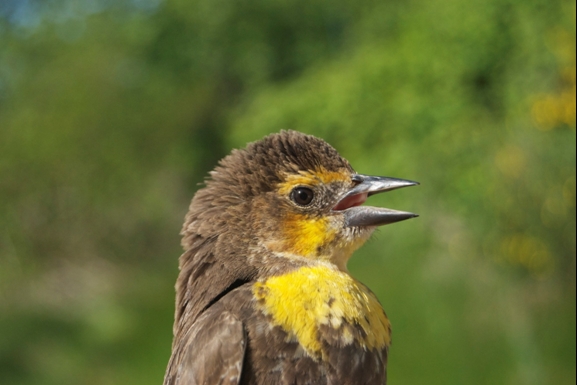 Interesting birds abounded this week, however, the number of captures decreased dramatically compared to previous weeks. The decrease started on the 11th when 79 birds were banded, and concluded at the end of the period with only 8 birds banded.

The first interesting bird occurred on May 11th when IIBO’s first Yellow-headed Blackbird was banded. This fantastic capture was followed by IIBO’s second House Wren of the season on the same day, which was singing next to the banding table. Dove diversity increased with at least one Eurasian Collared Dove heard singing on May 15th and 16th, and a Mourning Dove was heard on May 11th. Two Wilson’s Phalaropes were also reported from the sewage lagoons on the evening of May 15th. A Green Heron circled the woodlot on May 12th and a Bank Swallow was observed flying over the outer ponds also on the same day.

The most exciting and interesting bird of the period however was the second Calliope Hummingbird of the season, another male, captured on May 14th. With this capture, one may wonder how many are missed? Only four Calliope Hummingbirds have been reported this spring in the Greater Vancouver area, two of which have been captured at IIBO. The first young of the year for Anna’s Hummingbirds are out and one was captured on May 14th.

The first Blue-winged Teal of the season arrived on May 14th and small numbers of Cinnamon Teal have been recorded daily over the past week. A Wood Duck flew past the banding table on May 13th and two more were seen on the evening of May 10th. Two late Greater White-fronted Geese flew over the station on May 16th.

The Sora has been heard intermittently over the period, and a Whimbrel was seen flying over the banding table on May 14th. Spotted Sandpipers, Killdeer and Long-billed Dowitchers were seen throughout the period, but most other shorebirds were absent. 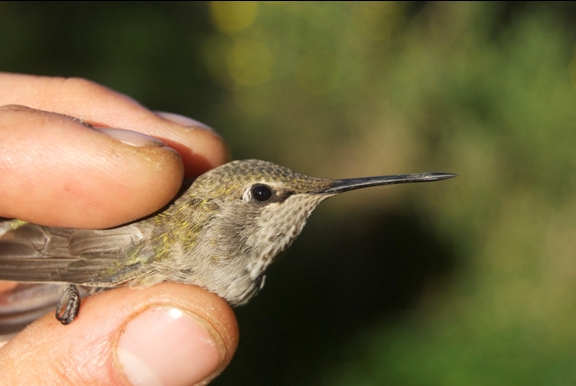 Approximately 300 Bonaparte’s Gulls were seen on the mudflats west of the washrooms on May 13th and 600 were present at the same location on the 16th. The first and only Herring Gull of the season was observed on May 13th.

The only flycatcher of the past week was a Pacific-slope Flycatcher heard singing in the woodlot on May 14th, and Warbling Vireos were around in small numbers each day. The first Swainson’s Thrush of the spring was captured on May 12th and Cedar Waxwings were abundant throughout the week.

Yellow-rumped Warbler numbers finally faded out this week with only one seen on the 15th and zero observed on the 16th. Wilson’s and Orange-crowned Warblers have been steadily abundant for the entire week, but both are likely around or just past their migratory peak and will begin to decrease in numbers. Yellow Warbler numbers have increased to around 20 per day during the second half of the week, and should continue to increase over the following week or two as we move closer to their migratory peak. IIBO’s only Black-throated Gray Warbler of the season was seen on May 11th and three MacGillivray’s Warblers were heard singing on May 15th.

Two to three female Yellow-headed Blackbirds have been present with the three to four males all week and four Red Crossbills were heard and seen flying over the outer ponds on May 13th.