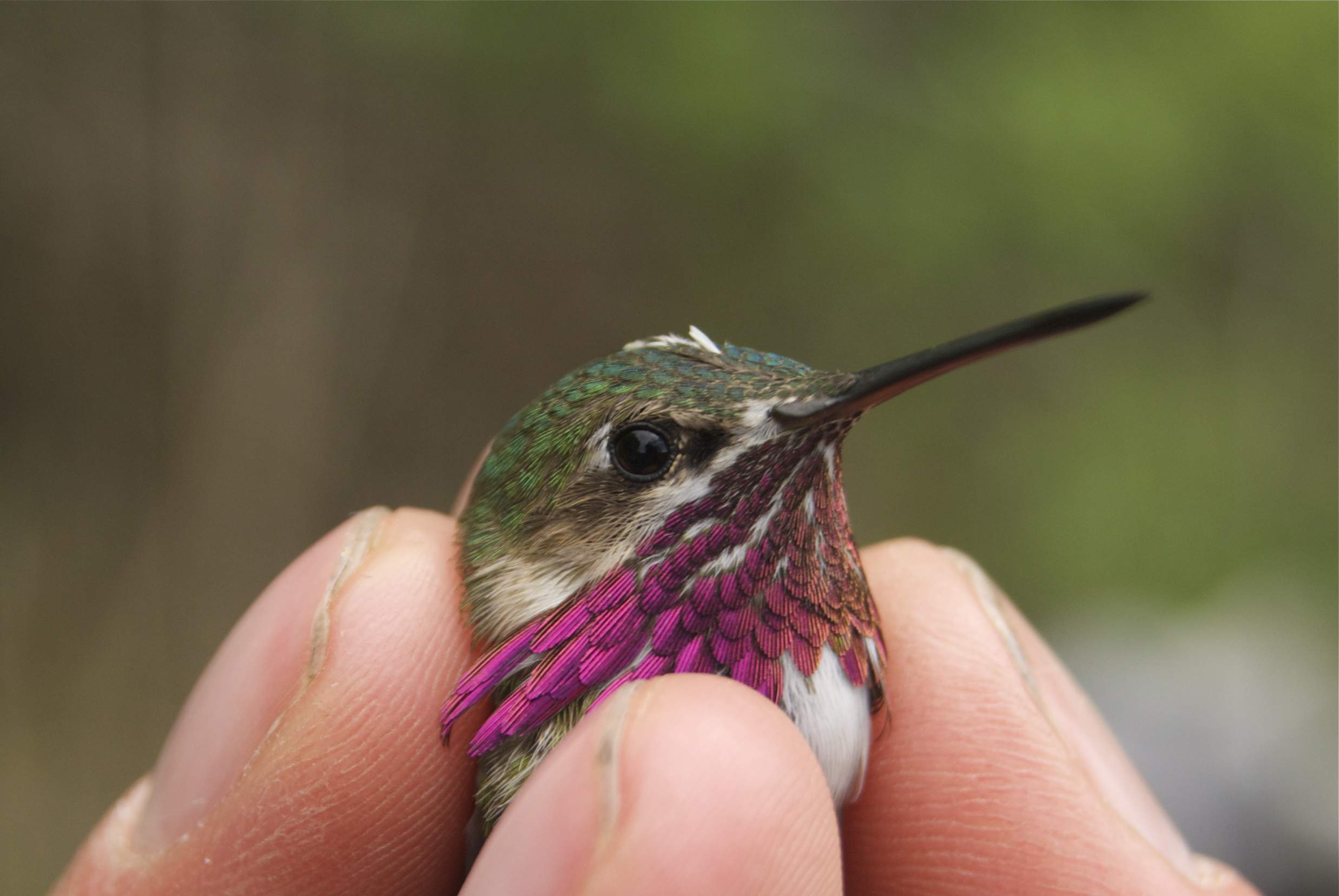 The most exciting birds of the past week were a male Calliope Hummingbird captured on May 2nd and a House Wren on April 27th. This is the second record of Calliope Hummingbird at IIBO and the third hummingbird species this spring. The House Wren was the first record at IIBO; it was heard singing for most of the morning on the 27th, but it has not been subsequently relocated.

Waterfowl migration has slowed down this week, but remained diverse. Cinnamon Teal, a pair, were seen on the outer ponds on April 26th, and male Ruddy Duck, still in winter plumage, was seen on May 1st. Flocks of up to several hundred Cackling and Greater White-fronted Geese have been seen, but overall their numbers have been decreasing. The Sora, present since the winter, was last heard on the 28th and the resident Virginia Rails have quieted down considerably as they have likely begun nesting.

Shorebird migration has been in full swing this past week, with large numbers of Dunlin, Least and Western Sandpipers observed daily either on the mudflats or flying over. Numbers peaked on the 26th, with 2000 Dunlin and 500 Western Sandpipers. In addition, a Long-billed Dowitcher was detected on May 2nd and Black-bellied Plovers have been heard on most days. Gull and tern numbers have begun to wane, as Bonaparte’s Gulls and Common Terns haven’t been seen since the 25th, and Caspian Tern numbers have declined to only 2 on May 1st.

Flycatchers and vireos have yet to appear in abundance, as only a handful of Hammond’s Flycatchers have been seen over the last week. Five species of swallow have been observed, including at least six Purple Martins that have returned to their nest boxes on the Fraser River, and several hundred Barn, Violet-green, and Tree Swallows foraging on the outer ponds.

Kinglets have almost finished migrating through, as numbers have diminished to only a handful of Ruby-crowned Kinglets by the end of the week. The first American Pipits of the season were seen on April 27th and the first Cedar Waxwings were heard vocalizing on May 2nd.

Yellow-rumped Warbler numbers have not decreased since the last week’s massive movement. The largest numbers were on April 28th, when a huge fallout of descended upon IIBO. By the end of the morning 191 were banded and over 2000 were estimated to have passed through the area. Large numbers have been detected every day this week, with over 100 banded on both April 27th and May 2nd. Most other days would have seen similar numbers if the weather had been more cooperative. This has truly been a phenomenal sight to see, as rarely does one get the treat of seeing an entire area saturated with warblers for so many days in a row.

Numbers of Wilson’s Warblers continued to build towards the end of the week, with 17 individuals captured on the 1st and 41 on the 2nd. This species will likely continue to build over the next couple of weeks. IIBO’s second Nashville Warbler of the season was banded on the 29th and another one was heard singing between the outer ponds on May 2nd. 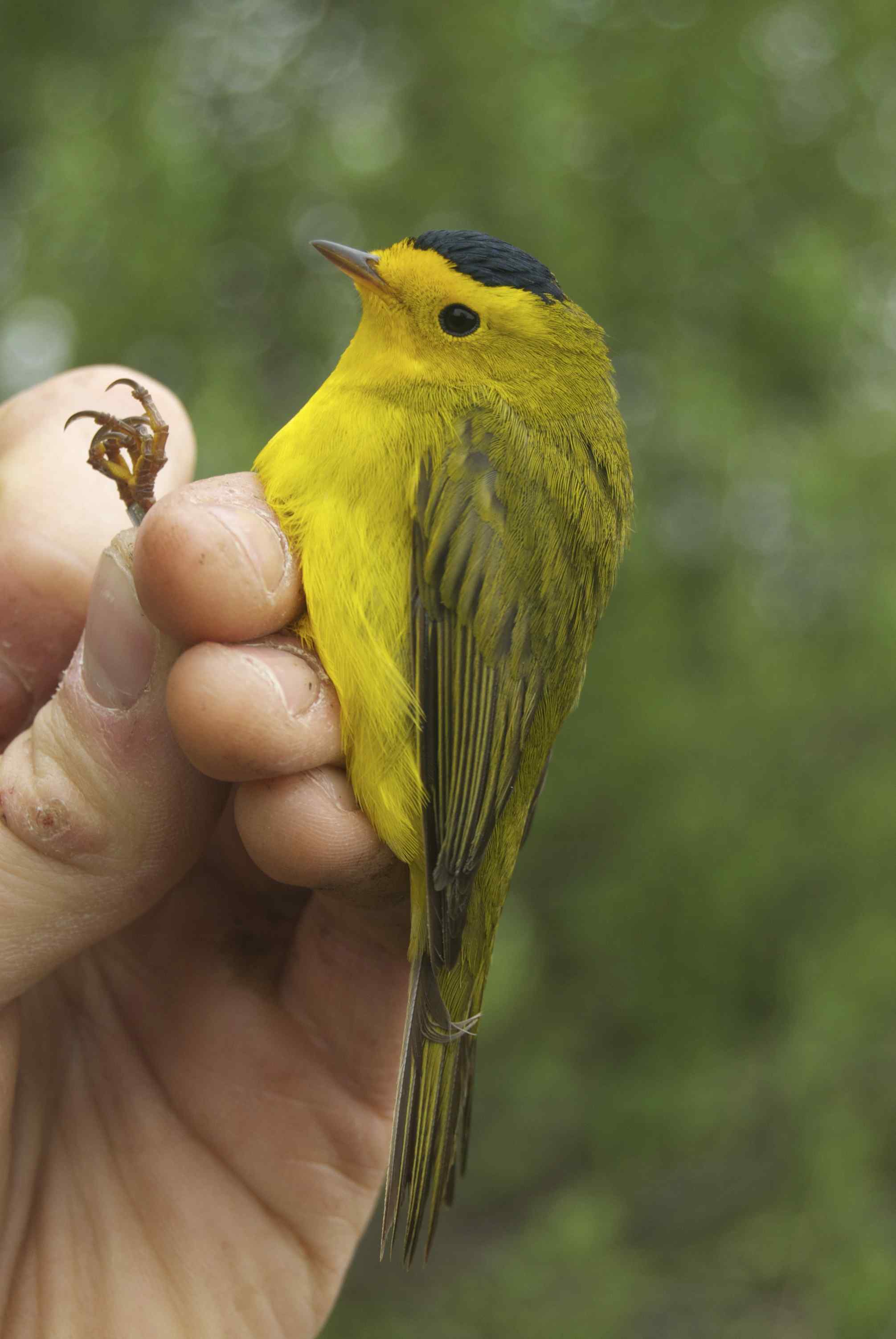 Sparrow migration has been gradually decreasing, but larger flocks of Savannah, Golden-crowned, and White-crowned Sparrows were present on the 28th-30th in the more open areas. A Western Meadowlark was seen near the washrooms on May 2nd, and at least four Yellow-headed Blackbirds have returned to the north outer pond. The male Yellow-headed Blackbirds are most frequently seen or heard on the island of reeds in the middle of the pond or along the west end of the pond.