The 2012 Spring Migration Monitoring Program at the Iona Island Bird Observatory (IIBO) started on April 18th. Initially, the capture rate was about average, but soon increased substantially, with IIBO’s busiest day yet on the 24th with 217 banded and 49 recaptured of 24 species. 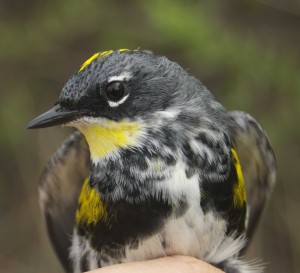 By the start of spring season swallow migration was already well under way. Violet-green Swallows were present in large numbers over the first few days of monitoring, with 14 individuals banded and 768 individuals estimated to be present in the area on the 18th. Violet Green Swallow numbers have dwindled since then and only three were present on the 21st. Tree swallows have been present in good numbers all week along with a handful of Cliff, Northern Rough-winged and Barn Swallows. The first Purple Martins arrived on the 22nd and at least a dozen have been present since then.

Warbler movement has remained steady throughout the week, with the highest numbers on the 23rd and 24th. One hundred and fifty warblers of six species were banded on the 23rd, the bulk of which were Yellow-rumped Warblers, with a fairly even mix of Audubon’s and Myrtle Warblers. An estimated 1,400 Yellow-rumped Warblers also passed through the count area on the 23rd. The first Common Yellowthroats were heard on the 19th and the first Orange-crowned Warblers arrived on the 21st. On the 23rd and 24th a male McGillivray’s Warbler was present and Wilson’s Warblers were first recorded on the 24th and 25th as well. The highlight of the season so far was IIBO’s first banded Nashville Warbler, a male banded on the 24th. 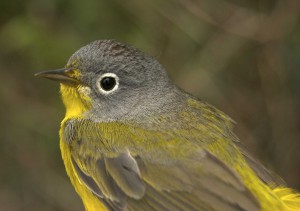 The first Hermit Thrushes of the season were banded on the 21st and have been captured in increasingly large numbers each consecutive day since then. A major kinglet push took place on the 22nd, with 36 Ruby-crowned and 19 Golden-crowned banded. Both kinglets have been present in slightly smaller numbers between the 23rd – 25th. Lincoln’s and Savannah Sparrow numbers peaked on the 22nd, while Song, Fox, Golden-crowned, and White-crowned Sparrows have been trickling through since the 18th as well. A Vesper Sparrow was also seen feeding beside the sewage lagoon on the 25th.

A pair of Wood Ducks were seen circling the woodlot and heading into the sewage lagoons on the 22nd and two Ruddy Ducks have been present in the ponds since the 20th. Two Cinnamon Teal were seen in the north outer pond as well as the sewage lagoons on the 25th. Bonaparte’s Gulls peaked early in the week, whereas the Caspian Terns are steadily increasing in numbers on a daily basis with over 200 on the 23rd and 24th and over 350 on the 25th. Around 20 Common Terns flew past and landed on the beach on the 25th.

Shorebird migration has been increasing since the start of monitoring, with a handful of Least and good numbers of Western Sandpipers moving through the count area. Over a thousand Dunlin have been present most days, but on the 25th around 6000 Dunlin, accompanied by close a thousand Western Sandpipers passed over the woodlot on their way from the sewage lagoons to the beach. Other shorebird highlights include a Long-billed Curlew seen and heard flying over on the 22nd, a Wilson’s Snipe banded on April 20th, and a Solitary Sandpiper was found in the sewage lagoons on the 25th.

A Sora has been present on the north outer pond at IIBO since early February and has been relocated twice this week (22nd and 24th). An American Bittern has been seen regularly since the 18th and the Yellow-headed Blackbirds first arrived on the 22nd and have been conspicuous and vocal ever since.